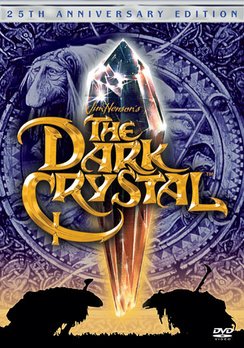 Yesterday I was finally able to see on DVD a movie that I have not seen in it's entirety since I was only a year old in 1984. Yes, what might have been the very first movie I have ever seen in my life was Jim Henson's Dark Crystal. For any of you young otaku who haven't seen it, it is worth the watch. If I'm not mistaken, it was this movie that inspired the creators of the original Final Fantasy game and of course the later games to have the storyline follow that of a crystal of power. Another reason otaku should take note to this is that for the movie's 25th anniversary last year, Tokyopop came up with a manga for the movie called "Legends of the Dark Crystal"...pictured below. 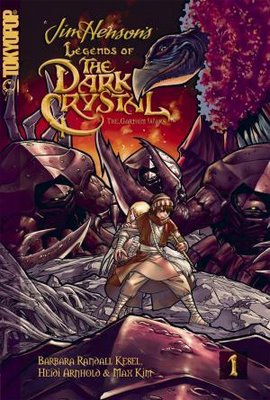 Though the manga was made by gaijin artists, the art actually looks pretty good. That's a lot coming from me since I'm the first one to point out the typically inferior gaijin "anime" drawings. Anyways, to my wonderful surprise, through yet another wikipedia search, the movie has a sequel in the works! The sequel's name is "The Power of the Dark Crystal" and will feature practically all the voice actors and production crew from the first one. Frank Oz who directed, did a number of the puppets in the movie including the ugly Augrah and who is most popular as the voice and puppeteer for Star War's Yoda was asked to direct again but answered with a simple "Why?" So, instead of Frank Oz directing the movie, Samurai Jack creator, Genndy Tartakovsky is actually heading the production as I write this.
Like the highly anticipated (and feared about) Dragon Ball movie, this one is scheduled to come out in 2009. Supposedly it will be a combination of both CG and puppets so here's hoping it comes out good.