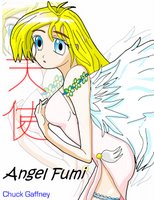 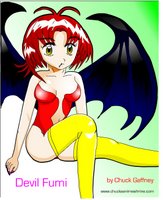 There are a few otaku who might have remembered my original plan to create my first video game and the official site mascot. Being that I've been a gamer since I was 1 year old (no kidding) it has been a dream of mine to make a videogame. Back in 04' I was on the verge of starting production of this project but was obviously side-tracked by my job and business choices that left me on that 2-3 year hiatus. I even had shirts and items made on the cafepress shop of the very first rough sketches since then.
Well, I'm glad to say that I'm back on track with the game which I'll call "Project Fumi."
To reintroduce or simply introduce you all to this, Fumi Kobayashi is the name of the main character and the main focus was that she had the ability to change into an angel or demon form. She also has with her a pink-haired fairly named Lily.
Originally I planned on making the story rather simple with her simply having these abilities and her goal was to save her loved one, Thomas from capture. Kind, of a reversed damsel in distress.
This will change now to something a bit more interesting. Not sure if Thomas will be in there but the story will revolve around an elemental crystal of power that both forms Fumi's powers along with the strengths of the main enemy's powers. The main antagonist will be a former friend of Fumi's by the name of Kyoshi. The story with the full names and official production pictures (not amateurish ones) will be in future posts...now on to the game.

Originally the game was to be a side-shooter similar to R-Type but instead of a ship, it will be Fumi you control. Oddly in the past years since I first proposed this a few anime games and sims have popped up with you controlling mech-girls in somewhat of the same fashion as I originally planned ^^; The main feature would be that you could change into Fumi's devil or angel form when a special meter fills. Her companion, Lily would act like a shield, healing agent or extra firepower. The game's engine will be actionScript via Adobe FLASH.

This holds true in the new plans, but here's what the game will also entail:
-Close range weapons (switchable on the fly and representing a different elemental in nature)
-Charged Long range attacks (Each form has one too, instead of just one normal firing attack, strength of blast increases based on time charged, ie: Megaman's X-Buster)
-Special attacks (Normal, Angel, and Devil Fumi each have their own super move)
-Throwing (elemental enemies that can be tossed into opposing elements for more damage)

I already have the control/button scheme and some of the basic syntax needed for the game so the engine for it could very well be 80% done before the summer ends. The main work will of course be the artwork, animation, sounds and level designing. I plan on kicking the 9-5 job for good in September so I'll have enough time to work on this since I'll only be doing anime product shipments for the store.