Next Mortal Kombat to Feature Batman and Superman? 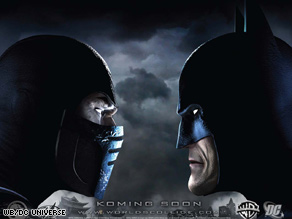 This looks pretty kool actually. Ed Boon, creator of the Mortal Kombat series recently showed that one of the changes in the series will be to have Batman and Superman in the next game. I would assume this is to compete with Soul Calibur 4's inclusion of Yoda and Darth Vader. Don't expect to do any fatalities though since they might not have them!!!
...Damn, looks like I won't have the honor of decapitating Superman with Scorpion and hear the words "You Suck!"

Check out the interview with Ed Boon on CNN.