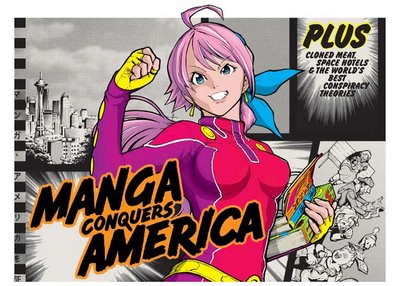 Image copyright Wired Magazine
The Manga and anime industry is really on the grow in the past few years. In this month's issue of Wired Magazine you see from the cover and the full story on how manga has taken the graphic novel industry by storm. 6 years ago the graphic novel industry which included comic books from major dealers like Marvel and DC only amounted to $75 Million dollars world wide.

As of today the graphic novel industry has grown to roughly $330 million with 2/3rds ($218 million) coming from manga! Hollywood has in recent years been creating top notch and high grossing movies all based on American comics and its first attempt at a big budget anime film, Transformers, has become a big success. Now there is a DBZ movie in the works and most likely others on the way. The only issue facing this kind of movement is if Hollywood is able to create a story as deep and compelling as many anime titles tend to be. Anime stories tend to have multiple layers to them in terms of character development that both American comics usually stray from and movies simply don't have the time to display.

Either way, as an anime fan I excited to see this industry grow... lets just hope that things stay Japanese and don't get too watered down or americanized as the mainstream accepts anime and manga. Discuss more in the anime forum.