Remember What Defines You and Never Let that Be A Job 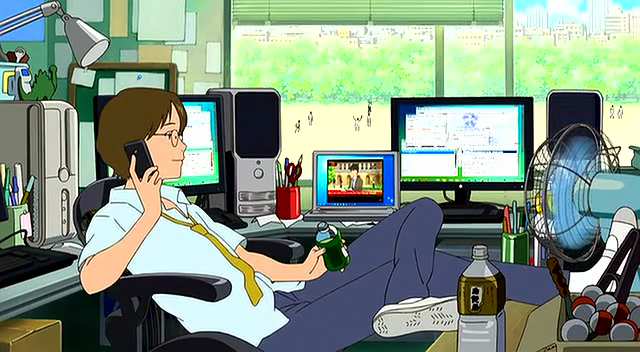 Remember that rather long term situation I've dealt with? You know, the 8+ years of working at an underpaid web dev job while trying to bring this anime site, the store and indie game development into my main 9-5 workflow?   Well, a few months ago that finally changed.  Not sure what happened...hell froze over? the Cubs won? there was a glitch in the matrix?  Yamcha didn't die in a DBZ fight?

What ever it was, a few months ago I got an interesting message from a site I all but thrown out as anything to care about, LinkedIn.  Despite getting some success with voice acting, publishing the PikiPop game, getting into podcasting, Let's Playing and returning to the forever forgotten project, Tenshi-Oni...I've basically thrown out any seriousness I took from recruiters and contacts from job/ project sites.  After dealing with IT recruiters for so long I learned quickly how much of a waste of time they are.  They come at you with arms flailing, saying you'd be the "perfect fit", waste your time and phone minutes doing an "interview" while never letting you talk to their client's (the job potentially at hand) and simply forgetting you exist after they take your email and phone for their quotas.  Even after I mention this interesting news....any of you going through the trials of IT/programmer recruiters...due take note of the scam artists many of them are.  Just build your own projects first and don't let them waste time you could be using to complete such projects.

Anyways, a few months ago I got an amazing email from a publisher in the UK.  The offer to author an IOS game development book.  For the past few months I've been working on that book.  More on it in a future post as I'm now half way done with that...but it's partially why we've been a bit weak with the updates and figure listing posts around here.  A little over a month ago, as said before I got what I never thought I'd see from LinkedIn, an interview invite.  Not some recruiter, not some test of a test of a test to have an interview.  A flat out, "hey, we think you could be a fit, come to the office for an interview."

With in a few weeks, here I am now working as a developer in NYC for that said company.  The underpaid camera store web dev job is over!  I'm now a full fledged pro Unity dev and am working with some cool stuff for some big clients...mainly in the realm of non-game VR experiences.  Stuff I'm still trying to get better at as I'm more of a game dev in the traditional coding sense and Unity is also still a newer platform for me.

So, does this mean this is the end of the anime site, the anime figure store and Tenshi-Oni or my own game dev projects?  Quite the opposite.  First off, the reason why I submitted my ego to the 9-5 job (when I'm obviously more fit for just running my own ship), is because sadly, past events outside of my control ruined my original run to have that life people like YouTube celebs, indie game devs and anime hobbyists have where their online sites/stores/activities pay for their lives.  I almost did it but (as seen in a past post, a certain "Sandy" storm ruined that).  I don't come from wealth like some of those people do whom can stand on such a platform and just grow it...so, like the rest of us I have to work a crap job that pays the bills; hence the camera store "web dev" job I had for all this time.

This new position is very great, I do like it and I even got to see some celebrities we get to work with in NYC.  My long train ride is taken care of and I get to eat some good sushi during lunch.  But... I came to know something about myself and I'm certain some of you might have gone through the same.  As great as this job is, as much as I've fought to get it and as much I've dealt with in the past, I wasn't prepared for the shell shock coming out of my comfort zone was.  In some ways I reverted back to my personality of my high school years (mind you I graduated high school in 2002, so it's been some time).  Much of the professionalism, personality fixes and all got reverted back to the subservient mentality that honestly doesn't help me in the new job or anywhere else in general.

I do love the job, I have awesome new coworkers and all but I can not forget my goal of this,  to utilize the job as a stepping stone for my true goals and dreams.  The shock of a new work environment is finally starting to fade away and as soon as I finish the game dev book, we shall be back to normal here.  Actually, I hope to bring things back to pre Hurricane Sandy times as I realized that it is indeed anime, video games, game dev and this site (and the sister sites) that I love.  I probably won't be truly happy until my fiancee and I are married, living in our own home (not an apartment) and we are surrounded by these hobbies and the work we can and have done in them.

The past job was not helping that overall goal and this one hopefully will.  It will still be a challenge until that day of true freedom comes but be it a great new job or an old job...don't let that position make you forget who you are and the hobbies you love.  Sometimes the work obligations and such live changes in general could make us almost forget or feel guilty for liking our hobbies...but don't do that.  Don't let a job (good or bad) change who you are.  Always make sure your goal is to do what you love ALL days so that you'd never work a day in your life.  There's still some work for me to do but now I believe I have a better vehicle with the new job to do that.

After this busy month, there should be some new stuff on the horizon here and in general for the site.  No matter what life throws at us, we won't forget who we are..and hell, there's new Dragon Ball episodes, news Sailor Moon and Final Fantasy VII is getting a damn remake!

There's so much to miss by forgetting who you are and what you love, so, we are still here ^_^.