A Message to Japan and Anime Studios On Their New Piracy Witch Hunt, From an Official Anime Retailer, Voice Actor, Game Designer and Fan 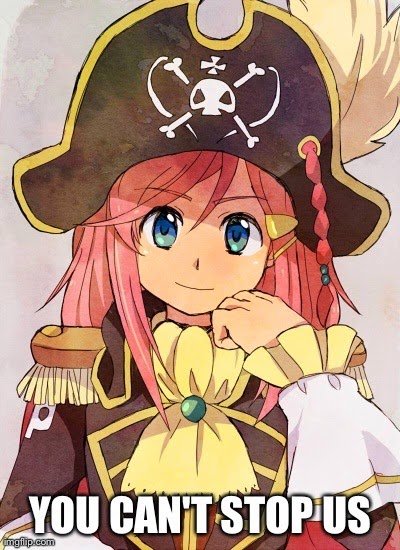 As some of you might have heard, Japan and anime studios are on a new piracy witchhunt to thwart mainly Chinese piracy sites.  I thought I'd put my two cents in as 1) an official anime retailer 2) a game developer with my own IP that I paid copyrights for 3) a paid voice actor 4) and most importantly, an anime fan...

First off, yes, there are sites that are hurting the industry, particularly ones in China that make bootleg figures and distribute full episodes to content that is available online...but they aren't the only targets of this governmental act, fans and the very fabric of what makes the anime community tick are in the crosshairs of this new (and not unique to Japan) in-bed-with-the-entertainment-businesses governmental action.  I'll start with quoting what I stated on G+ but want to elaborate more on....

Japan may try but they are going at piracy the wrong way. Take a page from Steam and Netflix; make worldwide, instant legal access for all anime/manga and drop these pathetic licensing/copyright/region-centric laws that hurt the fans and go against the tide with the Internet-driven market. We will pay for the real thing, but if there's no legal way to do so, then piracy it is. I'm an anime retailer, game developer and even a voice actor now but a fan first and I don't mind publicly stating this
...we anime fans are not criminals, just smarter than the braindead execs living in an entertainment business model reminiscent of the 1980's. I have no problem if people use my characters, my games and my music in the range of Fair Use. Unlike you Japan, and studios stupidly doing this witch hunt, i understand the power of the internet and viral marketing. So make your let's plays, AMVs, mods, OP/Ending posts of my content as I bring it out. I'll make the full content of my games and project affordable and global and unlike you Japan, I won't treat any fans of my content as criminals.
No legal, cost friendly access?..Then even I will don my eyepatch and make the pirate's life for me. Yo Ho


When I first started this site, which is now also a legit/official anime store site, I started it in 2002 in my then high school web design class.  This site became one of the many anime "shrine" sites, most of whom are long gone now.  This site stayed somewhat relevant when I started creating AMV pre-Youtube era.  There was a point where my site got taken down from all the bandwidth people downloading and linking to all of our AMVs.  Now, understandably, AMVs, like Let's Plays have been a grey area in the terms of copyright.  They were however in the realm of Fair Use, though both anime studios and music artists to this day never understood that. They still, in an age where social media is far more a part of life than in 2002, don't get that exposure through fan-based content is one of the best way for people to see and eventually wish to PAY for your product.

In the times I made AMVs (something I might jump back into with my knowledge of Premiere and After Effects now), I never made a penny off those creations.  I didn't want to since I knew the music and the art wasn't mine, but I thus became the free advertisement for those IP.  When Youtube came to be in 2005, I of course put my videos on there to mainly get the bandwidth issue out of the way.  I was also getting ready to do what many Youtube celebrities do now and post Flash parodies and such on YT.  In 2005, my videos were getting 250K views... in 2015!.  I not only look alot like the top Youtuber, Pewdiepie, but I would have been far ahead of the game compared to everyone else and would have made my own original content back then! (something I'm only now starting to do with my "chucksanimeshrine" YT page)

What caused this to all be derailed outside of personal life challenges was that my original Youtube channel "princetrunks" got taken down due to copyright infringement... that I couldn't defend myself from even when one music artist, QED, wanted me to be their inhouse editor after seeing my AMV!  I wasn't posting full anime episodes online... I just had ~4minute music video mashups and I was treated like some sort of criminal.

This criminalizing fans is what Japans government and the studios backing this crap up are doing.  Even today, in 2014 we will see an obviously successful production, like Attack On Titan, take over a year before it goes to English dubbing because of crazy slow licencing.  I don't condone nor support those who post whole episodes in piracy.. but what do you expect people to do?!  The industry is still the main reason why the piracy is so common.  It doesn't have to be but when the legal option is blocked by region control and take downs of the legit content due to licensing circlejerking... of course fans (who were going to pay mostly) are going to pirate.  It doesn't just go to the obvious full episode uploads... those I understand why they need to be regulated (if and only if there's a legal and affordable alternative).. it even goes to Opening and Ending clips.. so akin to the crap I dealt with back in 2005.

For example, try linking to a youtube video with the Sailor Moon Crystal Opening.  Since there's no official Youtube channel with that content (which for the studio could make a decent amount of money with adsense if they did)... of course fans will post the openings and endings.  Let them.  Is it the full episodes?, no... but yet every day Toei and the Content ID trolling they work with take down videos that are only spreading the advertisement of this new anime series.

In short, it's stupid and contradictory to criminalize your own fans.  Anime has thankfully come back from the "anime is ending " garbage that the cowardly heads of TokyoPop spewed a few years ago.

Anime is vibrant today due to social media, a medium anime fans first embraced before the rest of the #selfie obsessed world did.  Leaning on outdated copyright laws are a fools game in the modern world... and this is coming from somebody who paid the us government to copyright my game, Tenshi-Oni!!  I only did that to prevent people from making money off my idea in the sense of a copied game and to keep people from saying I made a game they made.. when this game and the characters here on Chuck's Anime Shrine (Fumi, Fumi's ability to transform into an angel or a demon, Lily, Yumi, etc) have been around since 2003 when I announced them (sans Yumi) and began making Tenshi-Oni (then called "Project Fumi") as a flash game.

Once I finally, finally get Tenshi-Oni, and this semi-secret game I'm making, out to the public.. will I demand people take down Let's Plays of the games, Amvs with my characters, fan art, fan fiction and the rest?? NO.

Actually, please do so.. turn Fumi and my characters into memes.  Make CG parodies like Miku gets, post all over the deviantart site.  MAKE MONEY from my characters with your fan art at cons, profit from views on your AMVs and Let's plays that have my Tenshi-Oni characters.  Unlike you, studios invovled in this witch hunt, I understand when word of mouth and viral marketing will only grow my IPs and I hope they do.  At the same time, I'll have the legal full copies of my games and music available for ALL with no region locks or other BS.  It's 2014 as of this post... the entertainment industry has to get out of the 1980's and stop trying to push the internet down with SOPA/PIPA/CISA-like laws to keep hold of their 1980' money.  I guess the fact that a lone anime fan can make his own content and probably not need a licence studio is why these laws and rules keep coming up.  Either change with the times or watch people pirate anyways.