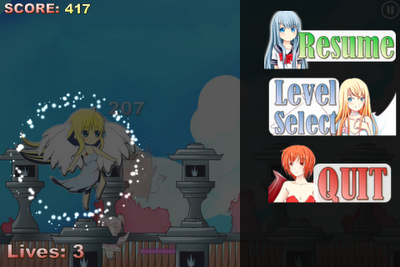 I know, this game has been taking up my tweets, FB posts, G+ posts, etc.  Hey, you can't blame me,  I've been playing video games since the age of 1.5 and the chance to make my own video game is one of the top items in my Bucket List; especially a game based off the characters from my own website that might one day make the need for a day job... obsolete.  Also add the fact that I've been wanting to create this game since 2003 but life has steered me away from my dreams and thus you have my current obsession to make this a real game.

As for blog posts about the game...well, I've been very quiet about it for about 3 months.  Reasons stemming from life's various distractions (office work, my own business's work, crazy large family, etc), the need to revamp this site (thanks mainly to the need to get with the HTML5, jQuiery & CSS3 times & Apple's retire Mobile Me service killing off my galleries -_-)... to the unseen internal overhaul of the game's engine's code and the insanely long debugging that comes from rewiring the thing.

It's been over a year now since I've announced the production of the Tenshi-Oni game and now there's truly some substance behind it.  Yes, it's been a rather slow process but the release of this game is coming and I'll make sure it is so.  So, without further delay... here's where the game is now since last time and what is slated: 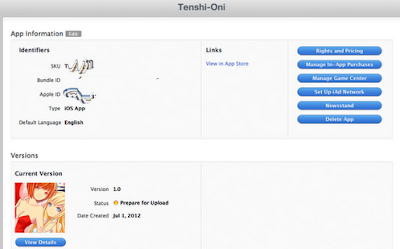 The first version of the game will be available for the iPhone 4/4s with the ability to work on the older devices (3G/3Gs) hopefully off the bat but I might need to make a patch to help people who still have them to play it.  Of course I  will have it on the iPad...just need to make sure the graphic scaling on the GUI items and effects match the larger screen and newer Retina Display iPad.

Android Users...don't fret.  I plan on porting it to Android...just need to get over a bit of a learning curve and find the right way to port it with as little hassle as possible.  If the game is at least somewhat successful, my time can be focused more on the game (and maybe hiring other fellow programmers to help) thus leading to the game on Android and other platforms like HTML5, Flash and XBox 360 market sooner than later.

There will be a FREE version.  The free version and the paid version for the first release probably won't be all that different.  The free version will have iAd ads on it but only in a few spots in the game...nothing too crazy.  Any time I add new moves, graphical updates, etc to the main part of the game...so will be in the Free version (until the possible need for a well drawn out, and worthwhile DLC)

As stated...there will be a PAID/FULL version.  The benefits of the paid version probably won't be seen until subsequent updates but here's what it'll have that the FREE version won't:

The release date is set already in iTunes for the early half of August....realistically I want it out then but it might be pushed back slightly...granted, i really want it out already..been talking about this thing for so damn long ^^;;


As you can see from the top image and this one just below.  I've created a more aesthetic and functional Pause screen.  Like how Angry Birds has their scrolling news feed on their pause screen, I will too.  It can be toggled on/off but I'll put news, merchandise links, and probably some fan art posts too ^_^
You can also see a new combo timer I added up top here. 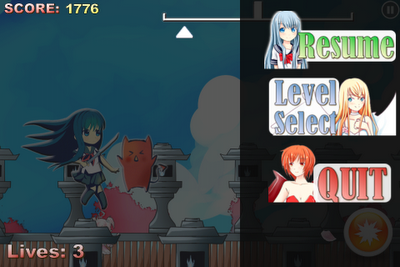 Though needing some polishing...the game has a fully functional Level Select screen.  I've even made it very dynamic for me the designer with the ability for it to create this screen reading from a .plist file.  In other words...I can create tons of levels off the bat and they automatically show in the level select screen.

The game will have two main sections: Story and Survival 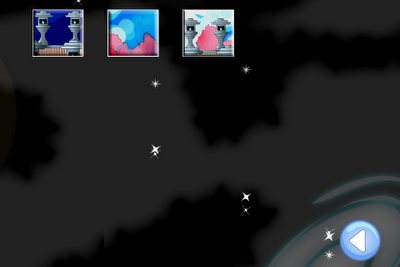 Final Attack Graphics:
Thanks to the game artist, Kenneos..I got some cool backdrop art that shows up at the start of Fumi's Final Attacks 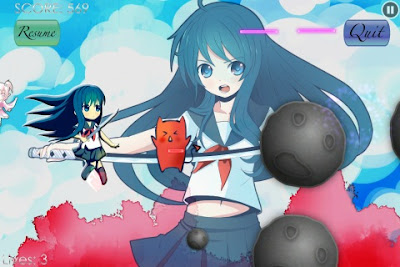 Gone are the default space enemies from the game's initial engine and now some original enemies are being added.  I'll probably put the space enemies in a special stage but now there'll be some enemies that don't look too out of place.  Not only did I modularized the enemies...I've made their AI expandable. For now I simply re-skinned the asteroids and ship images but very soon the enemies will be more dynamic and hopefully varied. 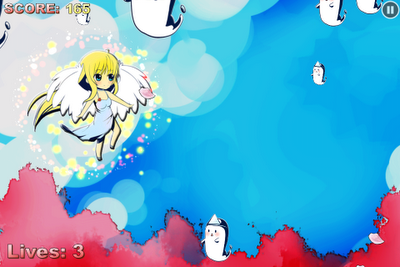 Some enemies can be brought into a combo when using the sword/swipe attack.  There's now a timer up top (seen in an image above) so you can get the point multipliers if timed right.

As you can see too, the game's font has been updated...thanks mainly to Glyph Designer.  Still not the final look though but getting there. 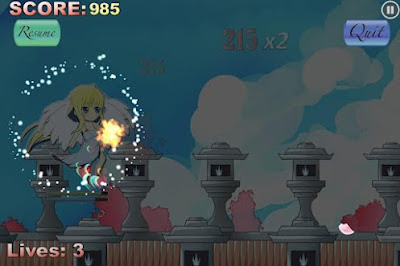 Game in motion and Beta testers:

I know I stated in my Tweets that I would try to have a Beta ready for a select few and an updated video giving a sneak peek...but due to tons of bug fixes with the combo system...I didn't have the chance ^^;; Sorry about that.  It will be soon though...not just for the beta..but for the entire thing I hope.