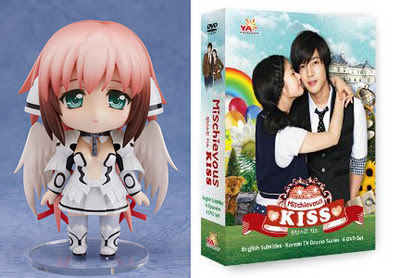 As some of you know, a few months back I also tagged a second contest to the Kawaii Blog banner contest.  This one was for a chance to win the Mischievous Kiss K-Drama DVD set, I'm also adding a free Crunchy Roll 2 day all-access membership pass as well as the beautiful Nendoroid: Sora no Otoshimono Forte: Ikaros Figure.  Originally, it was for ANY fan art or even game sprite of our mascots.  Now, I'm making it a bit more specific...

Currently I'm working on the long overdue video game that is based on our mascots, named Tenshi-Oni™  Since 2003 it was called "Project Fumi" and is finally being developed by me for the iPhone and iPad (before the iPhone was created I started in Flash actionScript). Thanks to a game "engine"/starter kit I purchased (see video), one can see that I'm utilizing the feel of a space 2D shooter.  Of course that will be replaced by Fumi and her ability to transform into her forms...with a bunch more features than what you see in the video.

For this contest, I'm asking for simply one game sprite animation of Fumi in her normal/schoolgirl outfit.  You can send and work on her other forms if you'd like but for now...just to start (since doing the full game would involve much more work that I do plan on contracting an artist to help...to be paid via $ and/or anime figures)  The sprite can be pixel art or, even better, like the sprites in Guilty Gear.  From the video of the game template I'm working off of, you can see it'll be a profile/side view.  The video shows the ability to fire an attack, I have so far added a charge attack (with awesome particle effects).  This can be the direction of the sprite frame animation.

Email me for your entry or any questions you might have ^^