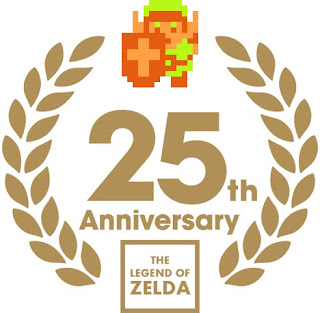 Today marks the 25th Anniversary of The Legend of Zelda.  At 27 I'm old enough to remember this debut.  Though I was only 2 at the time of it's release, I enjoyed this very tough and in-depth video game for the time.  The legend of a franchise it has become since then continues to rope in gamers young and old.  Like others, at first I thought Zelda was the name of Link but obviously that was corrected quickly.  Great memories in my life can be pinged to playing the SNES's A Link To The Past and the N64's Ocarina of Time.  I've not forgotten the games that have come out since but admittingly, I've only played them a few hours apiece  (for now).

Congrats again Miyomoto-san for another milestone in yet another genre creating game.  As an aspiring game programmer, anime fan and life-long gamer, I salute you and another 25 years of epic gaming.