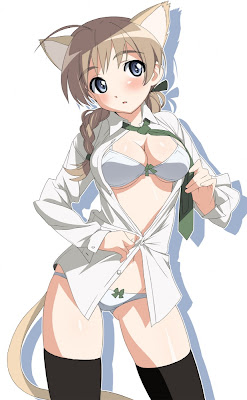 Been a busy week ^^;;  God knows there are anime/game related news I really should have covered like the Supernatural TV show being turned into an anime, the possible leak of the PS4, Mortal Kombat coming back in both a "test trailer" and in a newly announced game by..sigh Warner Bros., and the conglomeration of anime/manga/game creators to put an end to the manga scanning sites.

I could mark posts about those but I'll let the links speak for themselves and I'm still busy figuring out how to have somebody ship the HUGE amount of anime figures I sell on a weekly basis ^^;; (apparently Fulfillment By Amazon doesn't do international shipments...yeah..not good -_-...luckily only one figure, that I have extras of on hand, were sent to them to ship for me)

While I get the kinks out of the shipping tasks of my anime store, prep the contest entries for Black Rock Shooter and hopefully get anime.fm back on track...I'll just let you guys check out this wonderful #FanServiceFriday (#FF) pic ^///^