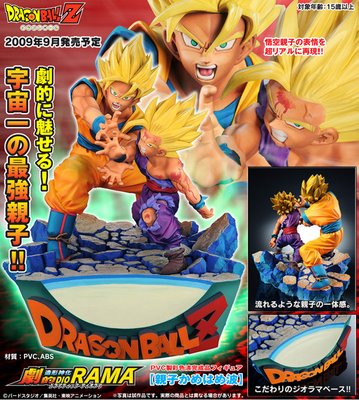 Just got a look at this figure this morning and it has a very, very accurate DBZ look to it. Depicting of course when Gohan defeated Cell with the just passed away Goku by his side, this is most definitely a DBZ figure to get. Let's face it, there's not many really good DBZ figures out there. Most of them are usually really cheaply made figures that tend to never reach the quality of say a Good Smile Company or Alter anime girl figure.

You will have to pay a pretty penny for it though. It costs about 10500 yen of probably in the range of $120USD (thanks to the yen being strong again =_=). To be honest, I'm not too certain of the scale just yet. If its like some of the other high quality DBZ figures that recently got released, it's probably a 1/7th or maybe even 1/6th scale.

I should be getting the rights to sell this in the store, so keep an eye out for it or you can message me and say "I want it!" and I'll see if its in my anime retailing powers to grab one.