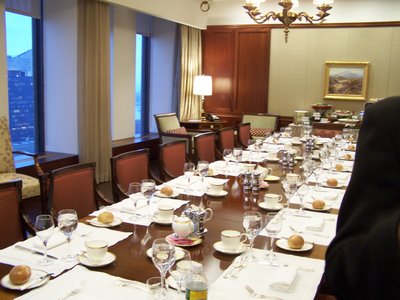 Last Tuesday me, along with a select few got the honor to visit the BusinessWeek headquarters in NYC. We were nominated as BusinessWeek's top readers of 2008 and the purpose of the meeting was to go over what BW and the BusinessWeek.com site should improve on and try to portray in this coming year. At the top floor of the McGraw-Hill building we were greeted to a wonderful and very talkative cocktail party and then a very tasty dinner and dessert.

(Update: check out the official blog post on this at BusinessWeek.com) 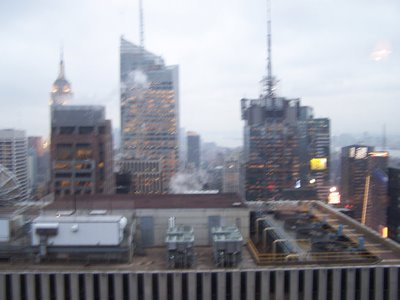 The whole set up was thanks to BusinessWeek's Editor-in-Chief, John Byrne, and his top editors of whom we got to meet with. It was wonderful to see such a large media company take the time and effort to reach out to their readers like this. John and the staff are all very down-to-earth and a pleasure to speak wit. In no way, shape or form did we feel belittled by them being there. (Can't say the same about my p/t job's boss though.) One of the obvious truths we are seeing in public media is that the media is being diluted by the numerous blogs and of course the dwindling newspaper sales thanks to the good old internet.

The one of the biggest topics we talked about though was the workings of different comment systems on the website and on sites in general. Currently, BW has a more welcoming commenting system than say engadget.com or youtube. For the most part you can state your opinion logically like an educated adult and not get too much slack. The balance of whether to have comments or not is always a big choice for a webmaster. There are times that garbage and childish comments by "trolls" can ruin the image of a story or site, yet the user ingagement make the site come alive so you do need it to some degree. One good example just from here on CAS is the fact that I had to make it so members only can post on the "Otaku Blurbs". This was after a troll or two got a hold of the feature.

So, what comment system would be good for both here or on a site on say, BusinessWeek? 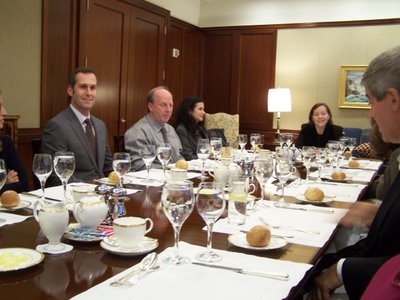 A quick shot us at the table

The other major topic that came up has been the current buzz on the web for the past year now. I'm talking of course about Twitter. In the coming months, BW will be utilizing both the comment system and Twitter together in different ways, most likely with use of # hashmarks to better categorize the events in business and throughout their site. Finding a use for Twitter outside of its obvious social fad has been the main question for many in both social and business circles. I mentioned a bit of a site I just started working with, beamagpie.com in which you can approve tweets to broadcast on your account and the more followers you have..the more you can get payed. Not certain on how well it'll work and I'll assume more like it will be down the road. Granted of course, my goal is to never come off as money grubbing advertiser on Twitter. Such actions by any person there will prevent any meaningful followship and might cause many of the issues that plague Facebook for the site as a whole.

I'll ask you, the readers of CAS... what do you find useful about Twitter? For me right now, it drives traffic to my site...and is a great place to vent with listeners.

...
After a 4+ hour talk we all parted our ways and we even got some great parting gifts as well like a shirt, BusinessWeek bag, flash memory card and flashlight. Another little tidbit is that this

might be the first of many meetings with a potential creation of the Business Week Readers Advisory Panel.

Part of our parting gifts, a BW flash memory card 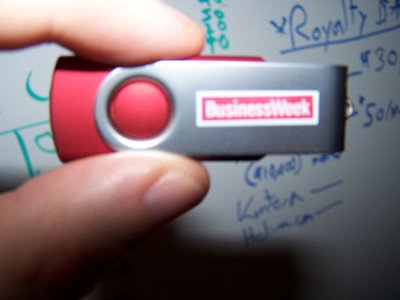 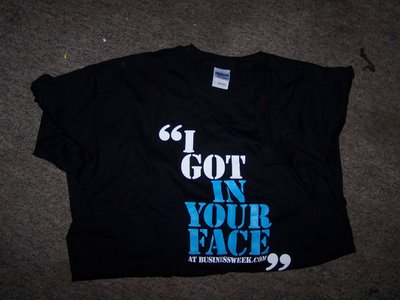 Here's the awesome BW we got

To everyone I met there at the meeting, I had a great time and it was an honor to meet you all, both the wonderful readers and the BW staff ^_^ Sorry I didn't mention any names, didn't want to single anyone out at all.

Here's to a great 2009 and hopefully more insightful meetings like this one.