The Leap of Faith 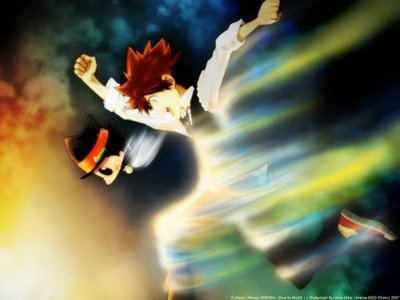 The countdown has begun. I did it. After years of claiming one day I will, after years of doing a network marketing company (hence why between 2004 and 2007 I was absent) and now the almost two years of running the anime business, I've finally put my two weeks (more like week and a half) resignation into my job. I was originally claiming that I was doing this before my 25th Birthday in November but, due to being offered health insurance, I stayed. This past Friday, the second week of working mostly from home, the stress my job gave me along with the back-lashing because I was home finally made me throw in the towel. On Dec. 24th 2008, the one year anniversary of Danielle and I's engagement, I will no longer be an employee. From that day on (as long as things go well of course) I will be working this site, anime.fm, charlesgaffney.com (BuisnessWeek connections) and the figure biz full time. My "title" will be a full time Otaku, writer, blogger and Anime Store Owner. Gone are the time cards, the morning commute, the pointless belittling that occurs in all jobs. As long as things go well, I will finally, finally own my life and Danielle will soon also do the same (no more Bob's Stores!).

The economy sure is scary right now. Lots of lay-offs are happening. Loads of people won't have a home or a job to go to, while you have me, a 25 year old otaku, a Computer Science semi-grad who is telling the corporate world "please take my job, for I don't want it."

I'm trying to prove my mantra as true. The truth that you can run your own life by following your dreams and doing what you love. Too many times I've seen people toss their dreams for a so-called "good job." When the schooling for that job, the boot licking and the stress caused by this job along with the inevitable layoff has done nothing but hurt you and your future. Chances are you don't want to do what you do and it's the very thing that causes us all to age and die from the inside out. If it wasn't for the Internet, yes, getting a good job would still be a good deal since starting a business would be that much more harder to do. Times have changed though society, schools and even our parents won't think that is so. While jobs fall everywhere, these pillars of our life will think it is still in our best interest to spend tens of thousands of dollars in college when, truthfully, if you don't have the scholarships and you have something like a business, a possible music, writing or art career, that that path would actually be the better route to take and more fulfilling to your being. Here's part of my letter to my boss:

"...I've made myself seem like I'm just some lowly worker who just follows
orders like a child but despite the childish behavior that constantly
comes from the unneeded, frantic panic at work; I've always just took
it and did what needed to be done. I have been grateful for the
chance you gave me to work from home and the other help you have given
me when things were down but since my being at home seems to offend
others and I must be a babysitter of some sorts, I'll come in next
week and the week after during the normal times and even on Tuesday
the week of Christmas but Christmas Eve will be my last day or any
time sooner if you see fit."
I want to thank all my current and future fans/customers for helping me do this and I will bring back contests and other cool stuff as this site and the internet in general progresses.

Hey, and I think its pretty cool to be a "full time otaku." So enough of the deep talk. Time to celebrate ^_^. Below is the video I always wanted to show as my victory dance...