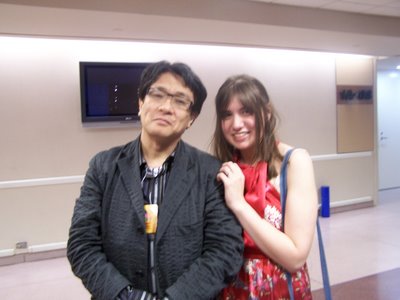 Got that post-con sad feeling a bit. No matter though; here is a review of our experience at the 2008 New York anime Festival and yes, the picture above is my fiancee, Danielle with none other than Vampire Hunter D creator, Kikuchi. Here's the run-down:
Day 1:

Left for the LIRR to head on over to the Javits center in the city. Got there at around 1:30pm and without a hitch headed to the main room where the first site was the Bandai booth that looked much like a stage than that of a booth. Got to check out other booths, stores, the array of fan art for sale, took pics of the cosplayers and even said hi to Ben Boyles of OtakuUSA magazine whom I've been speaking to before the con on this site's eventual inclusion in the magazine (more on that in the future). We then went to a few panels including the Kikuchi panel to meet of course Vampire Hunter D's creator, Hideyuki Kikuchi. During the panel, Yoshitaka Amano, the original Final Fantasy character designer and Vampire Hunter D artist snuck in to suprize Kikuchi and fans alike. After the panel, Danielle was able to snag a quick signature from him in her Vampire Hunter D vol2 book. Watched a bit of Lucky Star and I'd have to say...I need to buy that anime. The night progressed and we head back home via LIRR as we continued to do the rest of the weekend.

For the second day we arrived at around 11:00am but as expected, the entrance was simply packed. This was the case much of the day as the entire con was simply loaded with people. Screw the economic crisis, otaku and the entire game and anime business is doing fine with or without Wall Street. The crowd did prevent us though from getting Amano's signature and I couldn't even get a chance to try out my luck in the voice acting, but I will be doing something down that line though with the help of this site and my current projects. We did manage to make it to the Vampire Hunter D panel with Amano and Kikuchi being there. I also got to meet and get signatures from the original English voice actors from Speed Racer and Trixy (Peter Fernandez and Corinne Orr) While waiting for their autographs, Danielle saw Kikuchi in the corner of the hallway and we she approached him and his translator, they invited her to take a picture with him (first pic above). Kikuchi fans across the globe are probably ticked at that one ^^; We then saw Vampire Hunter D: BloodLust (holy crap it was awesome...and yes I didn't see it prior ^^;) and headed home.

After such a long weekend going back and forth from our home in eastern Long Island to the City, we woke up late for the 3rd day and didn't make it in time for the final ceremonies. No matter, we head down to Chinatown where we were able to shop a bit, eat some sushi & ramen along with meeting up with some Anime Fest cosplayers who too didn't want to give up the weekend out. Overall we had fun and next time though...I'll be sure to utilize my anime store ownership to get professional passes to avoid the crowds ^^;

*Meeting with Kikuchi, getting his autograph and getting a super rare photo with him that even Japanese otaku would be jealous of.

-The Gurren Lagen Cosplayers of the Bandai Booth
-Shockwave
-Ronald McDonald Sephiroth (see the gallery for that one)
-The creature from Spirited Away (forgot its name ^^;)

-The mid-aged, ugly, smelly, sweaty fat guy with the dirty Belldandy shirt. (No kidding, I didn't think the citizens of my home town of Selden would make it to there.)


Overall, I can't wait till the next convention we go to and its very good to have finally went to one again after almost 4 years.

(All of our pictures are now live on our Anime Fest 08 MobileMe page.)