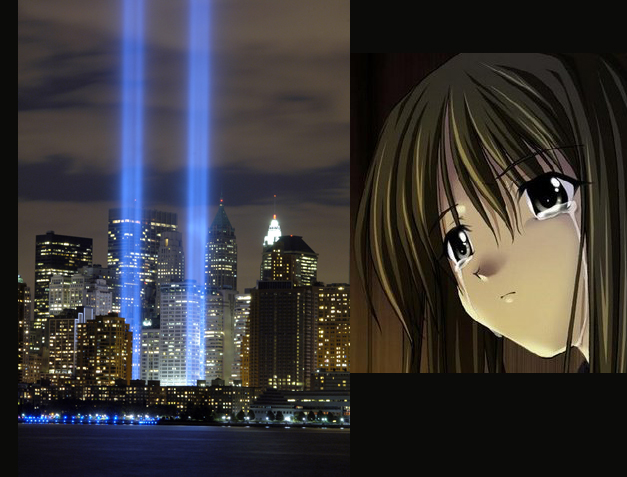 (5/1/11 Update:  Finally, Osama Bin Laden has been killed.  This marks a great day for New Yorkers and those just wanting to live a good life without the scurge of the Earth there using their religious fantasies for violence.  To all in al Qaeda whom wish to face me one on one...bring it.)

As most of you have probably heard many, many times today, today marks the 7th anniversary of the attacks on the World Trade Center and the Pentagon. Being that I'm in New York here on Long Island, I can't help but to write about it. About 500 people from my area died that day, people who were just at work on a nice, clear morning who didn't know what was to take place. There's a make-shift memorial of the Twin Towers just a block away from me on a neighbor's front lawn. It's been there since about a month after the attacks, and everyday, while the world and even this country kind of forgets 9/11 throughout the year, except for today, I continue to salute it and remember. I also didn't forget that al Qaeda, Osama Bin Laden and most involved are still out there along with the evil known as extremist religious fundamentalism that is the root of this act like this and acts similar from the past, present and future...even though it almost seems the US has forgotten this with its mindless Iraq war and thinned out troops in the lands of our real enemy.

I was just starting my senior year in high school. Within a week's time of being there I already knew my packed schedule with almost all AP classes was to be way too much for me being I was also working full time as a semi-manager at Friendly's Ice Cream. This website was maybe just a few lines of HTML code on my web design class computer or just a sparkle in my eye. I was getting a bad case of "senioritis" and wanted the immense free time I could have for anime drawing and my site if I cut the AP courses. As each bell rang I threw in the towel to each AP course but it wasn't long before I heard the commotion in the hallways. At first people thought it was just a freak accident and some misguided small plane hit the towers. Then, shortly after the second plane hit, the worry began to creep in. I was handing the books to my AP biology teacher while she viewed the image of the second blast on the classroom's computer. It was then that we were told to sit and listen to the radio report live. I was in a state of disbelief. When they said one of the towers fell I thought they meant the large radio tower on one of them. I never thought they could have possibly meant that one of and then shortly later that both of the enormous Twin Towers were falling to the ground. Middle of the radio broadcast the bell rang for the next class and everyone was on their cell phones. Practically my whole family was in eastern Long Island with my mother being a stay-at-home-mom and my father being a home business owner so I didn't have a cell phone then nor did I have reason to call my family. I still can't get and will probably never forget the image of all the students of Newfield High school in the hallways. Many were crying and scared on their cell phones as they tried to reach loved ones. It was utter chaos, sadness and confusion. There were many who didn't and never will.

At the same time my fiancee, Danielle of whom I didn't meet till March of that school year was worried about her father, Alex who was just a block away from the towers. Alex told me the scenes were something he wouldn't forget. Many didn't see much of an issue with the first plane but when the second hit, he said everyone began to panic. He was fixing parts of a building nearby when he saw the explosion with paper flying everywhere. Shortly after he heard loud thuds hitting the ground around his building but those were not debris but the bodies of those who jumped from the tops of those 110 story buildings. A site I doubt will ever get out of anyone's mind.

So, on this day, 7 years after it all happened, I was driving to my chiropractor's early in the morning and this year like every year at about 9:00am a surge of sadness hit me and I began to cry for those who lost their lives. Many of my friends lost a loved one and in me still burns the anger for Osama Bin Laden and all like him. If given the chance I'd take no second guess on deterring al Qaeda any way I could whether it be to destroy any possible computer system they have or just simply break their faces in. So while the world remembers 9/11 today, I will continue to salute that Twin Tower memorial near my house everyday like I have for the past 7 years and may all my condolences go to all the families of those lost. If given a chance I will defend their honor and I know many of you would too.