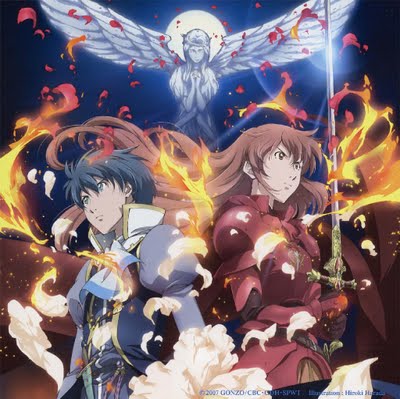 A few days back I finally got to see the entire Romeo X Juliet series and all the hype was indeed true...and then some. I won't create a story-detailed review since god knows there are a ton of them already since the series came out in 2007 and I don't want to give away anything either if you haven't seen this. This anime is something that becomes a wonderful experience for those who chose not to read up on anything beforehand. Romeo X Juliet, wonderfully animated by Gonzo and obviously taken from William Shakespeare's play is exactly what it states it is, an anime adaptation of Romeo and Juliet.
I have of course read the original play and chances are many of you have since it's the bragging child of any artsy, fartsy European-enthusiast thespian teacher; which there are alot of in our public schools here.

At first glance, one might think it's very detached from the original story but make no haste in that assumption; before you watch this, think of it as the events that inspired Shakespeare to write the play and that will make this gem all the more sweeter. Shakespeare being a character in the story itself is a cleaver little twist in which makes my prior sentence true...plus he's a damn funny character with the others poking fun at his plays that have too much art and little substance (something I've told my English teachers ad nauseam).

All 24 episodes are stunning in story, art (duh, it's anime), and execution. Throughout it your emotions pour out to the characters and the hatred of royalty and elite society I most definitely felt but in both a truly artistic way and very anime-styled way, you see the very human force that undermines both classes of people in Neo Verona and toward the end, we see hidden forces that overshadow all that was going on in the first place. It won't be till the very end that you feel the whole emotional brunt of this stunning anime, so watch all the way till the end. The Lena Park version of "You Raise Me Up" will indefinably bring tears to even the most unwavered hearts and FUNimation with their voice talent did a stunning English dub that also can't go unrecognized.

Romeo X Juliet has made me an anime fan all over again and I'll go as far as saying that this will probably be remembered as the best anime series of the decade.

Check out the opening and ending below and be sure to support Gonzo and FUNimation by buying the box sets of this; trust me, you will not be disappointed. (I might be able to supply the box sets through my store for the x-mas season)

For more info on the music of Romeo X Juilet, check out my post on anime.fm.