Ok, so the economy has been doing bad. We can go on for hours on the causes, the culprits and the results of many of the actions taken. One action trying to be done will automatically prevent new jobs, destroy thousands of current ones and cause any type of recovery we see now to go out the window. It's a law that would force you to pay sales tax on say anime figures you buy outside your own state.

I'm talking about the tired case of Quill vs. North Dakota, aka the e-commerce tax, or the "amazon tax." Looks as if two moronic politicians, Senator Mike Enzi (R-Wyo.) and Representative Bill Delahunt (D-Mass.) want to try to unconstitutionally break a Supreme Court ruling that clearly states that you only pay sales tax if the business you purchase from is in the state you reside. I've already made my point clear and as of today, the great editors and staff at BusinessWeek.com put my comment on the front page for today. 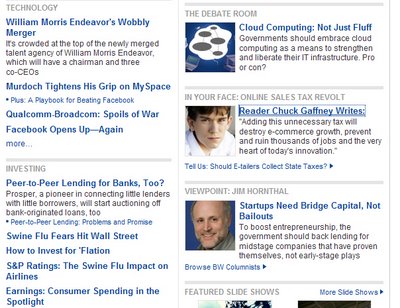 Many Internet businesses have grown despite what the economy has thrown at them. My anime business has grown steadily as well despite me starting it in late 2006 and throughout this whole recession, my customer service has been creating a thriving company that hopefully soon I can create jobs with. New York already broke the laws of the land by having it where you have to pay the already inflated New York sales tax even if you don't live in NY!!

Because many rich scammers out there can't run their hedge funds anymore, the states are strapping for cash they once had from these legal Ponzi Schemes and that means your anime items, not just from me, but from every anime business or all products from all e-commerce businesses will cost more for you. Instead of doing the right thing, many states want to steal money from the average citizen by imposing this tax. Granted a very small universal tax should be a solution to accommodate the state's need and ours but...we all know that won't happen either because of states like New York who can't balance their budget even in an utopian society.

I know I'm sounding much like Code Geass's Lelouche but fighting this is a must for anyone who wants to see the economy continue to recover from such idiotic actions. Call your state representative or aid ebay.com and overstock.com in their fight against this. You can also add to the discussion on BusinessWeek.com along with me. Despite what naysayers think, many e-commerce sites, including my own already pay enough taxes to our state government. I cringe every time I have to impose the Suffolk County 8.625% sales tax on anime figures bought by my fellow New Yorkers. An besides, if my company grows and I add more employees, income tax comes into play and that's where the money should come from! Its a crime to begin with and there is no way this crime should be allowed to expand.